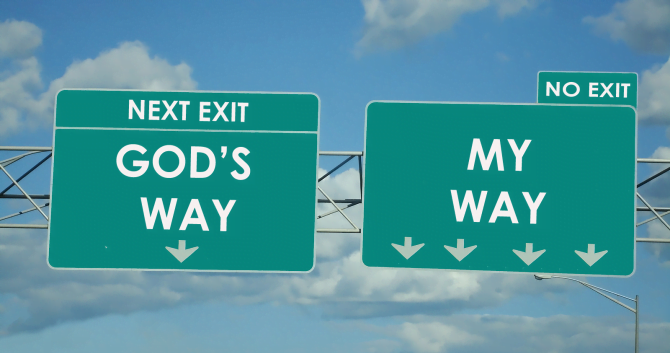 OK – I’m sorry. I couldn’t resist it and to be honest, as I try to be here, that is probably about as funny as this post is going to get. Yup, this is a serious post.

It’s been well documented here that there’s a lot going on, and that we feel God has called us to move on. I’ve only mentioned it once or twice… maybe thrice at a push 🙂 – The thing is, there is a lot more to obedience than simply saying (and believing) that we are ready.

I’ve now been in my new job for two whole weeks, and it’s definitely an interesting place to work. I think I’ve grown beyond the “honeymoon period” with jobs in some ways, so try to go in with my eyes open. Nowhere is perfect, but I can honestly say that I think I’m going to be happy here. There’s progression. There’s training. There’s resources. And it’s all for a good purpose. Yes, there are politics and there will be frictions but show me any job where that isn’t the case. Even a one-man operation will have frictions and politics.

As I previously blogged, we feel that the starters pistol has now been fired and that this is the moment that we’ve been waiting for for three years and more. Except we’ve kinda sat there almost ignoring the elephant in the room.

Until Friday the other week. The Mrs was on Taxi duties so I was home alone (well the boys were in the house but in bed) and looking forward to an evening of catching up on TV and relaxing after my first week in the office. All was going swimmingly and then something unexpected, but always welcome, happened.

I don’t mean He walked to my front door and knocked, before coming in and sitting down for a cuppa. What I do mean is that the very tangible presence of God, through The Holy Spirit, came and gave me a not-so-subtle nudge.

You see, the timing of this whole new job thing is just a little awkward. Our daughter has just started her GCSEs and will be taking some exams in only a couple of weeks. Our kids are settled. We’re hitting a really busy time of year. We love the Church we’re in. There are friends here, for all of us. The commute isn’t *that* bad… and then… and this… and that… and the other…

It’s a fork in the road.

One road is easy – staying put. The other is full of nerves, uncertainty, upheaval, upset, change and more. One is a yellow brick road. The other has Gods purpose waiting for us.

Can you see the temptation that is there?

Without sounding presumptuous and sacrilegious, I really felt God telling me that this was our time in the wilderness and that we were facing our time of temptation. Then came the real kick up the backside.

When a starting pistol is fired, the athletes don’t just sit down there and wait. They get of their blocks and run. They don’t walk, or jog – they RUN. As fast as they can.

And that is the image I was given. And that was the kick I got given.

Why were we sitting there? Why hadn’t we even browsed RightMove? Why weren’t we DOING something?

On the one hand we can stay in the coziness we have here – and God won’t leave us, but we won’t be obeying Him and we won’t be moving into all the plans He has for us. On the other hand we can move forwards in obedience. We can move into what God has for us, even though there is an uncertain path leading up to it and even though there are going to be heartaches and challenges.

If it was just me and the Mrs – we’d probably have moved this weekend. With or without selling the house. But with a family to consider.

I hope I’m giving you a sense of the turmoil that there is?

It does mean that we are falling on Gods mercy, grace, provision and love – trusting Him for all that lies ahead.