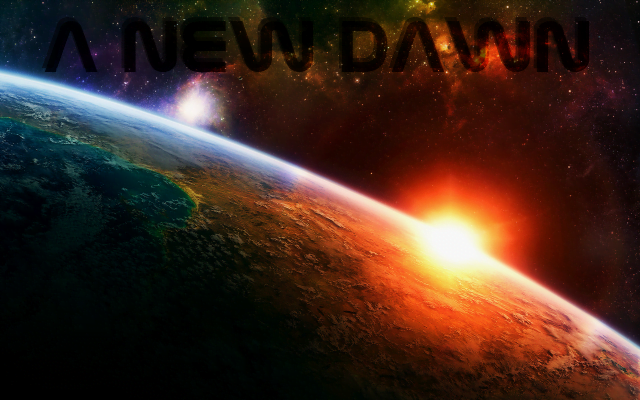 Even spelling it out it doesn’t look much on a page. It’s quite remarkable how the small things can be the biggest. Remarkable yet also logical, scientific and biblical. Scientific as know we’re all made of cells and more, and if you’ve not seen the Laminin clip then head over to my post here. Biblical – remember “faith as small as a mustard seed”?. Logical – well, we’ve all experience it haven’t we? That one moment that changes the course of our lives, or even those lots of moments that form the road map for our lives.

In some ways it’s the beginning of the culmination of a 3 year faith journey. Not over yet, and quite how long this new day will be is yet to be seen, but it’s certainly the beginning of what we’ve been praying about and looking for.

On the 3rd October I start my new job. It’s exciting and scary, nerve-wracking and at the same time peaceful, happy and sad. I guess that’s what a lot of new chapters are like, what new days are about really – the ending of one day, the start of another.

I’m genuinely excited about what I’m heading into – there’s potential in this job, and it has the appearance of being a career instead of merely another rung on the ladder. There’s challenges, progression, a chance to play a part in something bigger and a feeling that the only limitation to what lies ahead would be me.

The job isn’t the whole story though just as that first bit of light, following that dark of night, isn’t the full day but merely heralding the commencement. This new role is the first step along a new road for us.

I’ve spoken about how we felt God was calling us out of Stamford and into Peterborough, but we found that when we pushed on that door it wouldn’t move and we quickly began to feel that it was more about God testing whether or not we would be willing to move full stop. I’ve written about how we were having to learn Obedience and being willing to say “Yes” to whatever God says. I’ve also talked about how this year would be about waiting for the starters gun to fire.

The waiting is done. The new job has been found and, whilst it is commutable (albeit right on my personal comfort limits for commuting), that does mean that it’s time for us to get off our knees and get moving.

Boy, does that scare me typing those words. It’s exciting as well, but the weight of that phrase – “get moving” – is huge and tremendously daunting.

3 years in the waiting and we are now at the point where it’s time to roll out.

*pause whilst that sinks in for me typing it here*

We’re not 100% on where exactly God wants us, but I get the sense this will be one of those times when the right place will be the place that is open to us.

It’s not just about moving to be closer to my new job, although that is a part of it but we’re not expecting to be camped on the doorstep of my office! This is about moving into that new phase of our journey as a family, and about being where God wants us to be.

We’ve been in this house now for a couple of weeks over 9 years. It’s the longest I’ve ever been in one house and it’s the only house that my boys know (Liam having been born whilst we were here, and Luke moving here only 8 months after he was born). Despite having grown up as a RAF brat, I’ve gotten accustomed to being in one place – and it’s now time to carefully lift up those roots and replant elsewhere.

When, where, how – we don’t know yet… the day is only just beginning. All I do know is that this is the time, the starters gun has been fired and we need to GO. A sprint or a marathon? I guess we’ll find out – it’s been 3 years so far but who knows eh?

One thing I would ask please is for prayer. We need wisdom, guidance and especially peace. It’s going to be tough for us all, and especially the kids, so we really need to feel Gods love throughout the coming weeks and months (maybe even years?)