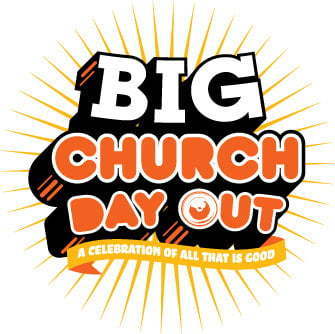 For those who were there, either this year or last, the above title will probably have you humming an annoyingly catchy little ditty written by the one-and-only Graham Kendrick as the “un”official theme song for the Big Church Day Out.

Yes I know it’s been a few weeks but life has been really crazy since we got back from our exodus down sarf and I’ve only really started to catch up on all my thoughts – but sit back and let me tell you of miracles, divine intervention, mini-reunions and some of the best Christian music that is out there right now.

For those that don’t know, the Big Church Day Out has just had it’s 2nd annual event in the grounds of Wiston Hall. It’s a family orientated affair featuring a main stage full of the biggest names on the music scene, a second stage featuring lesser known (but not lesser talented!) artists and then a load of activities, stalls, charities and more to ensure that there is no way you can possibly get bored (unless you’re a tired 9 year old boy but that’s a different matter really)

We’d decided, after going to the midlands event last year, that we would take advantage of the free camping offer (due to there NOT being a midlands event this year) and head down for the two day event – figuring that it would be fun camping for the first time as a family and that doing both days would allow us all to enjoy the main artists at least once, making it less of a stress if the kids didn’t want to sit through your favourite artist. My brother was immediately up for it, and we made a last-minute decision to invite one of our daughters best friends (2 teenage girls – was that *really* wise??? read on…)

The months ticked by and we slowly, then very panic-rapidly, started to get together camping gear and all the necessary bits. We were blessed in that we knew of friends who were selling a ma-hoo-sive tent for a decent price, with the bonus that we knew where they lived if it all fell to bits on us (love ya really Timbo :-P) – but then there was news that really knocked the wind out of us. My brothers planned shift-swap for the weekend had let him down and nobody was willing to cover the Saturday of a bank-holiday weekend for him. This was really gutting as my bro is always one of the first to help anybody out if they need cover and will go out of his way to be there when needed.

We had to do all that we could – and that revolved around praying. Lots. And getting others to pray. Lots.

In a slight moment of lack-of-faith-sight, both I and Mrs H started to wonder about him catching a train down after work on the Saturday so that he would at least get 1 day. We even looked up times, prices and directions to the station.

He had other plans. There was no way my brother was going to miss this and with only a few days to go, someone needed an urgent shift-swap… and they weren’t going away over the bank-holiday. The sense of joy, and relief, and faith rising up was amazing. We all felt like laughing, crying, giggling and dancing – we KNEW this was going to be a good weekend.

The Friday arrived and my brother arrived, we fetched Amy and got as much of the car-packing done as possible. With 2 cars going down, fully loaded, and a 3 hour drive we needed a decent start so planned on a 6am alarm call on the Saturday.

5:30am and we were up! Unbelievably buzzed and filled with childish glee at what was ahead of us. We breakfasted, tanked up of caffeine and rolled all the last minute bits out to the cars – then loaded up and hit the road.

Unsurprisingly there were quite a few toilet stops along the way, but even with those we made excellent time – even with roadworks on the M1 and M25 – and got down to Wiston Hall with plenty of time before the first acts. The tent went up without too much drama, and beds were inflated and bags etc all brought from the cars…

Then, it was time to go and face the music 🙂 catch part 2 in a couple of days to find out about the music and all the fun that we had.