November 15th 2010 is a date that is undoubtedly one of the key dates of my life so far, and yet one year on it’s almost also one of the most forgettable.

After fighting the NHS for far too many years, even waiting 6 years for an MRI that should have happened at least 4 years earlier if not sooner than that, I underwent a Cervical Discectomy.

It was the culmination of years of bureaucracy and hassles, pain management techniques and drug regimes, understanding and disillusionment (being called a liar and told it’s all in your head is rather deflating!) – but it wasn’t something that we had rushed into. The operation carried risks – let’s be clear about this, I was having surgery on my spine in the cervical region… if something went wrong or a slight slip happened then I faced life as a quadriplegic! As it turned out later, if I hadn’t have fought or if we hadn’t taken the option of surgery then that would have been the end-game anyway as my spinal cord was being compressed by over 50%.

A cervical discectomy, in my case, involved some bone shaving and removing some discs to be replaced by a cage filled with bone, polymer and titanium. So much so that my neck doesn’t hinge at the bottom like most peoples but rather 2-3 inches higher up at the top of my neck.It also makes me my own version of the Bionic Man

It was easy to look around the ward that day and dismiss what I was going through as “minor” – there were people in for brain surgery after all. That notion was eradicated by the ward staff though as I was informed my surgery was amongst the trickiest on the schedules and that I had one of Addenbrookes top Neurosurgeons conducting my surgery! Yes, all of you who said I needed a brain surgeon – I got one!

Expectations for the surgery were mixed. Some said I should see reasonable improvement straight away, others said it would take time and others said it was a complete waste of time (the movable MRI study I took part in removed any of the validity of that idea though!)

I said after surgery I was going to allow myself 18 months to decide for myself if it had been a success, a prevention of worse to come or even a failure. After 12 months I think I’m in a pretty good position now to state how I feel it has worked out.

There were several key factors for me with regards to the surgery:

The other area that came up once the experimental MRI results were seen (which wasn’t until after my surgery) was relieving the pressure on my spine so that I could face a future without fear of losing the use of my arms and legs.

In some ways I was naïve in believing that this was achievable (my heart leading there!), and yet I was also realistic in believing that the best I could hope for was improvement rather than outright cure (my head at work) – I never expected a full recovery, as that damage has been there far too long, but I was looking for an improvement… just a bit of relief.

Well (after a final MRI, a 2 hour delay, and a really good discussion with a great consultant) it turns out that, as has been my own experience the past year, the op hasn’t actually “fixed” anything. I’m still in pain, on the full dose of painkillers, with pins and needles, and with weak motor skills that rule me out from ever defusing a nuclear bomb in the heart of Peterborough! (It’s OK Bruce Willis, your job is safe!)

The op has managed to relieve most of the pressure on my spinal cord, although there is one area where it is still compressed on one side, but the delays in getting the surgery have meant that the damage is most likely permanent.

I firmly believe that God heals through the work of the surgeons, and through medication. I believe that He has given us the knowledge that enables medicine to be understood and used. There are times though when we must rely on a divine touch from The Great Healer Himself, and that’s where I am at – I am fully reliant upon Gods healing touch to restore my spinal cord to it’s natural condition, to rebuild the damaged nerves, and to heal the overall long term muscular and skeletal consequences of my situation.

Disappointed? Yes, I am. As I say, I wasn’t expectant of a full cure – but I did honestly believe I would see some improvement. Disheartened? Sometimes if I’m honest, but most of the time I simply fall back on my belief that there *is* healing waiting for me… In HIS time.

Now, do you want to see something cool? Here’s a quick snapshot, rather shaky I’m afraid, of my dynamic MRI. with a piccy above it so you can understand what you are seeing… enjoy! 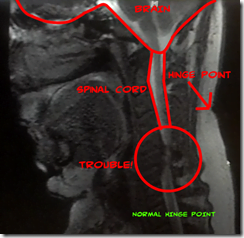