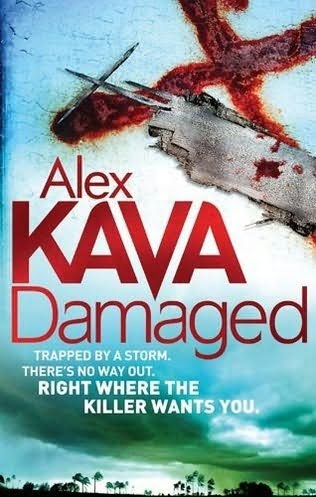 Storyline: A floating box of body parts, an approaching category 5 hurricane and a fatal mystery outbreak at a naval medical facility lead to a rollercoaster of a ride for FBI Profiler Maggie O’Dell as she gets involved with the Pensacola Coastguard in working out where the body parts came from. Her “friend” Col. Benjamin Platt in the meantime is also deployed, without her knowledge, to the Pensacola Naval facility to investigate the mysterious deaths of multiple patients who are all succumbing to an unknown virus.

With twists, turns and interweaving storylines the clock is ticking…

Review: It’s always interesting picking up a new author – well, new to me anyway. Having read loads of different crime and thriller books, from a good variety of authors, I had decided to try out another writer to see what they were like (always on the lookout for more books to stuff my shelves with 🙂 )

Damaged was a strange book in that the tagline on the cover never really comes to the fore, leaving you expecting something that doesn’t materialise. You are always aware that the three main strands, four if you include the hurricane, are going to collide at some point and this can feel a bit frustrating as I found myself almost shouting at the book because the obvious seemed to be overlooked far too often.

I don’t want to come over as being down on this book, but it’d be a lie if I didn’t express disappointment. There’s no real profiling involved, which was something that I was looking forward to, and the first 2/3’s feels drawn out with the final 1/3 feeling rushed and needing more room to breathe. In fact the final page came as a complete shock as it did feel as though Kava had set herself a page target, hit it, and stopped dead.

In a genre that is packed full of knowledgeable, tense, and well-written books this is an average story and as a result it was a disappointment. Would I buy more of her books? Sure, so long as they are in the bargain bins – I certainly wouldn’t go out of my way to buy them otherwise.

P.S. Yeah, I know it’s been a LONG time since I last reviewed a book or anything but I thought I’d give it another shot and expand to cover music, movies and stuff as the mood takes me. Especially as I am now a music reviewer for Cross Rhythms. 😉